Chronicles of the Possible

When we arrived in Cangas we knew that everything was going to be possible. The first human being we encountered was a blue-eyed boy with an intelligent look, vagabond in appearance, recharging his mobile phone in a lamppost, with his two good dogs, two drumsticks in hand, a radio cassette player and singing Zoo songs. A cheerful boy, always smiling or laughing. It was a sign, no doubt.

The Mostra do Posible is a revolutionary event. Seldom do so many good collectives, people, colleagues and friends come together to create strong vortices. Those kind of whirlwinds that really change the story.

We came to help with the assembly and organize the matter that Faircoin was the official currency of the Mostra. Something unusual to use another currency instead of the one that the State have imposed to us, but also something that we must get used to if we aspire to a future in freedom.

Maybe we are not fully aware of how much the economic system in which we are immersed oppresses us. Everything, including the currencies we use, are clearly configured to take away the power that we as human beings are entitled to. Coins that impoverish us, enslave us and immerse us in the delirium of Tantalus, condemned never to reach the water or the fruit that surrounds him. We do not realize that an elite has appropriated the world, the same one that gives us rights with a dropper just so we can always see the juicy and unreachable carrot in front of our eyes. Masters and lords of the war, of the resources of the earth, of the earth itself. With the taxes that they collect from the returns of our work, they pay for the violence with which they try to silence our discordant voices.

They will say that this world offers to all of us opportunities for enrichment, which in no way is true. It is enough to be born in the south of the south, for example, to prove it. But, in any case, it is not our goal in life, excessive wealth, but the free, joyful and really valuable life of those who understand that there are resources for all. And if there are not, it is because a few monopolize more than what would be necessary to live in peace.

The Mostra do Posible is a platform for all those voices that believe in other worlds that are in this one: feminists, ecologists, solidarity, cooperatives ... worlds based on equality and mutual support. Peaceful, clean, creative, fair and free worlds. If it is possible without all those imaginary lines that we try to make real based on barbed wire and armed people.

The invisible chain of slavery in this dystopian world is an unreal economy based on an infinite and unsustainable growth. Its chain links are the economic tools called money. Money is in the economic relations of peoples but, obviously, when this money is, for the people who use it, a free and voluntarily agreed tool. If not, it is nothing more than a tool of alienation and conquest. The Mostra do Posible is a beacon in the midst of darkness.

That night we put the four banners that marked the collective area and the social market.

The next morning we set up some structures and tents. And the party began.

Workshops, talks, round tables, presentations, debates, documentaries ... all around the solidarity economy and social movements. Pure cream. Real activism. All this sprinkled with performances, music, dance, magic and spectacular performances.

We were there to collaborate in the organization and information on the official currency of the Mostra: the Faircoin. A decentralized and free electronic currency that, in our opinion, could be an auxiliary tool to establish economic and human relationships between different local networks. Faircoin and the activist community that promotes it, Faircoop have as their primary objective to contribute to an essential transition towards a post-capitalist era. The current economic system is unsustainable and totally unfair. Like Faircoop, Komun argues that we must empower local economies, close production, human economic relations in freedom. The tools we use are definitely important: barter, free disposal of resources, cooperation, social currencies, mutual credit and a universal decentralized currency that serves as a link for relations between communities and peoples. This last role can be performed very well by Faircoin. Not because it is a perfect currency (it could be another) but because it fulfills conditions to assume that role: decentralized, free and secure, easy to use with affordable technological means and a modest basic knowledge. Faircoop determines in an assembly manner its value in relation to other currencies and, up to now, supports the determination to provide exchange to state currencies when it is necessary to those people who offer ethical goods and services in exchange for Faircoin. We are not enthusiastic about the latter in Komun, but we understand it, despite the immense difficulties and setbacks involved in guaranteeing that liquidity. On the other hand, in about three years a worldwide network of sites accepting Faircoin has been forming.

At Komun.org we are always willing to collaborate with sustainable, open, self-managed and free projects, in any field in which we are able to contribute something positive. We believe in diversity and free thinking. We understand that if we really want to build a better world, we must always try to understand each other. So, among other actions, we create tools to contribute to this. It is the union of objectives in the diversity of ideas that will make us strong; to all us.

For this Mostra do Posible we contribute some graphic material: 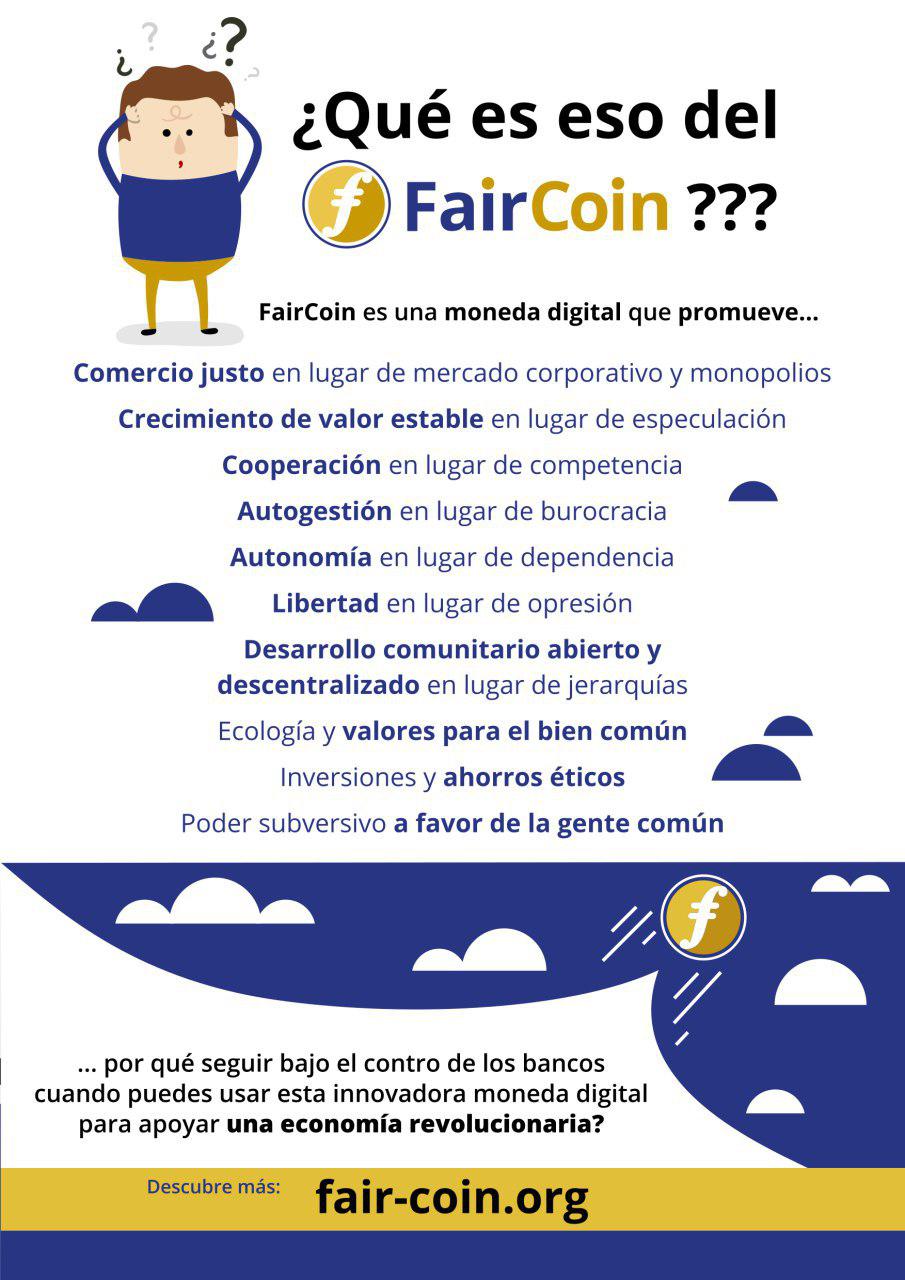 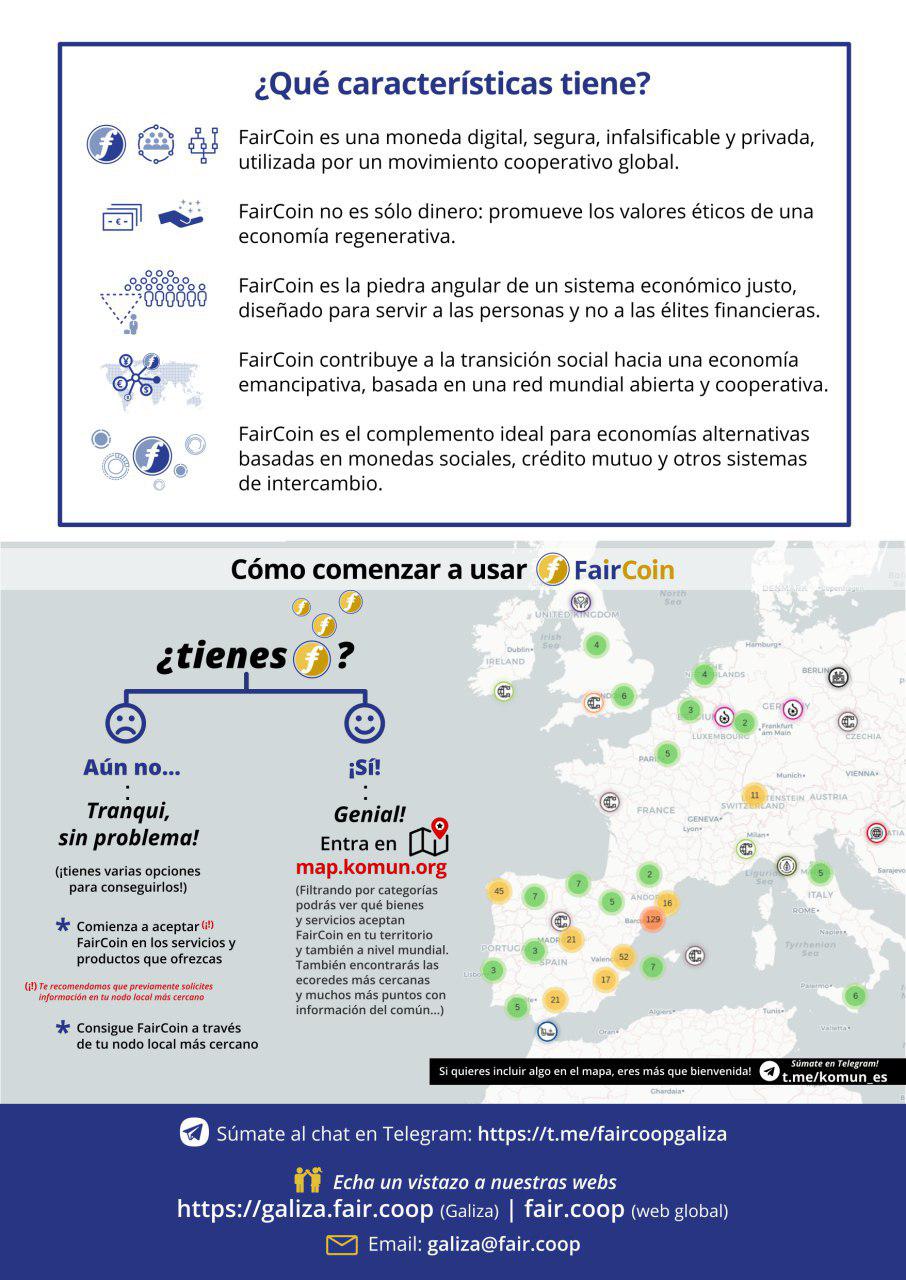 And, of course, all the other tools that we are developing and which we have made available to Faircoop from the beginning and to all collectives or entities working for the common good. Many of us are directly linked to the Faircoop project. Therefore, we wish that we can, together, develop that economy that the world needs.

In the Mostra do Posible many ideas have been born, there have been encounters and we have discovered synergies. Our beloved blue-eyed vagabond was happy exchanging Euros for Faircoin to enjoy the good craft beer and the excellent organic wine that ran through there. Well, surely he would be happy likewise without Faircoin. But there is something magical about what happened there. Suddenly, people assumed the idea of Faircoin with complete naturalness. It was clear: the currency to use was Faircoin, the Euros lost some of their omnipresent prominence. People approached the Exchange Point with a clear awareness that they had to exchange their Euros for a new currency. They knew its value and calculated, in many cases, the change with amazing expertise. Nor was it an insurmountable obstacle to think about using an electronic wallet. The banks are already educating people in this regard. But if the reason to use the mobile phone to send and receive coins is an authentically social, revolutionary, disobedient and activist reason ... the thing flows smoothly, despite certain technical details that are still found; more for our slowness in developing tools for all that in the technical fact itself.

We are clear that we must focus on computers and mobile devices solving people's problems instead of wasting time on solving problems of poorly developed software. Our work is a social work, voluntarily delivered to the common good. That's why we believe in free software, in the joint effort of a community walking towards common objectives.

The Mostra do Posible has been an example of open ideas, exposed to be developed in common. If using an economic tool, a useful and free currency, is not the problem; then we must focus on establishing economic relationships between local networks. It does not matter if each one uses one or another currency or if they do not even believe in currencies. Faircoin can be an option for when it is necessary to establish relationships between local networks that can not simply be solved by barter or other simple means. The idea is the same as the Esperanto; an idea that we obviously like: a universal auxiliary language that allows us to understand each other easily and without having to dedicate a life to learn other much more complex languages. A language that respects native languages and is used naturally when needed. That is or we believe that it should be Faircoin's idea as far as economic relations are concerned. A free currency, not linked to any State or source of vertical power. A simple tool to understand ourselves economically.

To build these horizontal and free socio-economic networks the use of social economic tools must be natural, without artifices or impositions. Our suggestion has always been that people accept and use mainly local social currencies in their day-to-day lives. When it is not possible, Faircoin is a good option. Even more, it is an act of rebellion against a perverse socio-economic system. Every time you use social currencies or Faircoin you are making use of tools created by and for the people and not by and for the elites who control the world at their whim and for their own benefit. You accept social currencies and Faircoin to the extent that you can use them. Faircoin, by its design, is also apt to be saved and to be a reserve of value to use later, when you need it, as this network grows like the mycelium of a fungus under the ground. We are more and more who, disgusted with the capitalist system, choose to tear bits from our own lives and break links in this abominable chain. Every time you stop using coins created by the capitalist system, you are freer and you make the world around you more free.

During the Mostra do Posible many luminous ideas have flourished. The Mostra itself was the final destination point of a circular exchange route where , once again, Faircoin allowed us to understand each other. In the midst of this enthusiasm we could have established interesting alliances based on the many conversations we had. There was Nosa Enerxía, energy cooperative. Would we like to pay for the electricity we need with Faircoin? Definitely. It is something that will come at the time. We understand that economic relations must be based on a balance between giving and receiving. If Nosa Enerxía agreed to charge in Faircoin, it would help facilitate the lives of those who move using mainly non-capitalist currencies. But this cooperative, undoubtedly, will continue to need Euros to carry out its work so that, finally, Faircoop would have to assume its commitment to provide that change. Perhaps, this type of essential cooperatives and others, for example, the El Salto newspaper, could assume, as a contribution to the project of strengthening an economy authentically social, some payments or subscriptions in Faircoin. Question of deciding to participate actively but with criteria. Our suggestion would be that they accept payment in Faircoin to some collectives that are especially active, that produce goods or provide necessary services accepting Faircoin. Take and give, they call it or better, contribution to the circular economy. That is how the world begins to change..

The second edition of the Mostra do Posible came to an end. We picked up the chairs, dismantled all the structures, removed all the tents, untied the banners. The avenue was again the usual avenue. The people who gave their best during those days embraced each other, which seems an indisputable sign that we are on the right track. We continue forward, full of ideas and desire to make them real. Tomorrow will be another day, but it will dawn painted with the colors of what we have done today.